Amazing tech used for the Opening of the Winter Olympics 2018

The WOW in Olympics opening ceremonies features changes in technology.
For Londons 2012 opening ceremony it was pixel mapped LEDs at every seat in the stadium. This year in Korea it was a World-Record 1,218 drone show in the sky.

Pyeongchang drone show comes compliments of Intel's Shooting Star platform, which enables a legion of foot-long, eight ounce, plastic and foam quadcopters to fly in sync, swooping and swirling along an animator's prescribed path.
"It's in essence technology meeting art" says Anil Nanduri, general manager of Intel's drone group.
Intel's Shooting Star drones are about a foot-long, weigh eight ounces, and can fly information for up to 20 minutes.
As it turns out, bringing 1,218 of those drones into harmont doesn't present much more a logistical challenge than 300, thanks to how the Shooting Star platform works. After animators draw up the show using 3-D design software, each individual drone gets assigned to act as a king of aerial pixel, filling in the 3-D image against the night sky.
Last-minute “impromptu logistical changes” kept Intel from performing its drone light show live during the opening ceremonies for the 2018 Winter Olympics in PyeongChang, South Korea. But that didn’t stop the footage being aired for those watching the tape-delayed version, nor did it stop Intel from celebrating the feat on Twitter.

Viewers tuned in to a tape-delayed broadcast on Friday night that showed pre-recorded footage from December, when Intel’s light show broke the Guinness World Record for flying the most drones, 1,218 simultaneously.

The live show was intended to be a pared-down version of the feat, with 300 drones flying at the end of the opening ceremony, but that too was scrapped.

“During the Ceremony, POCOG made the decision to not go ahead with the show because there were too many spectators standing in the area where the live drone show was supposed to take place,” according to a statement from the Olympic organizing committee.
Check our Wired.com article for further information. 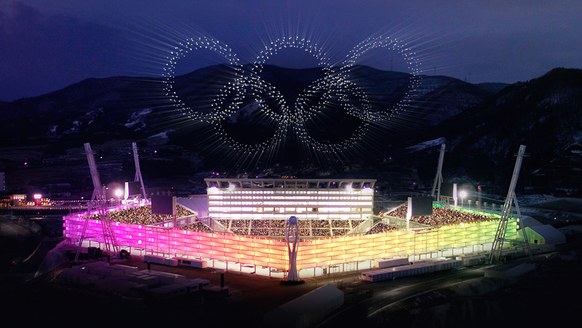