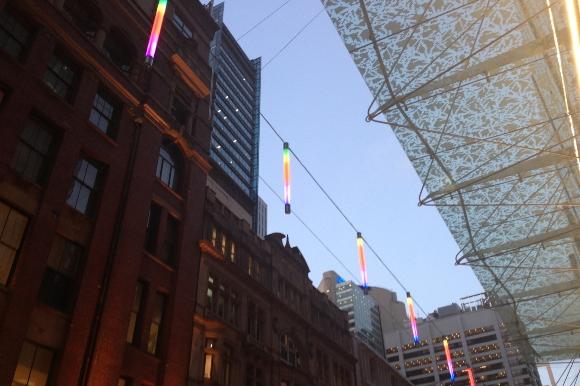 The well-trodden footpaths of Pitt Street Mall will this month be quite a lot brighter for the steady stream of commuters and Christmas shoppers, after the Lord Mayor of Sydney, Clover Moore, switched on the new catenary lighting system on Thursday, 3rd December.

Working closely with Tony Caro Architecture on this final phase of the Pitt Street Mall upgrade project for the City of Sydney Council, and in collaboration with Westfield, Haron Robson prepared the design documentation for the public and seasonal display lighting in one of the most well known shopping precincts in Sydney.

Designed to help reinvigorate the Mall as a premier retail destination, the catenary provides practical lighting and brings a theatrical element to the area. The multicolored lighting system consists of 3-metre tall vertical light tubes, suspended 14 metres off the ground down the centre of the pedestrianised street. The catenary system is wired from adjacent buildings on both sides and features a total of 23 luminaires, spaced 7 metres apart, for the entire length of the Mall.

Each purpose-designed light tube contains down lights, which automatically adjust to changing ambient light levels, as well as decorative lights, which are digitally controlled and can be programmed to provide animated lighting displays for special functions and seasonal use.

Design
Accommodating more than 65,000 pedestrians and shoppers each day whilst connecting the major transport hubs of Circular Quay and Central Station, Pitt Street Mall is the busiest retail precinct in Sydney. As a major shopping destination, the Mall is a key public space within the CBD, and was to be emphasised with its own clear and unique identity to encourage night-time use. It is also part of a significant corridor route for pedestrians and because of this the space had to be seamlessly integrated into the wider City network as a well-lit through route.

With the Mall fulfilling these two key roles, the redesign for the upgrade project had to be conscious of both. To treat the Mall as a continuous, linear space and to encourage movement, the design team decided to exclude traditional light poles and instead have all functional and decorative lighting provided by a catenary lighting system. The new lighting was designed to be as spare as possible to ensure it didn’t act as a ceiling to the light, open-air shopping experience.

Smart Lighting
Minimum lighting levels for public domain areas such as this are based on the light levels required to capture CCTV footage. The Mall previously relied on light spillage from nearby retail units to provide illumination, which was unmanageable when shop-front lighting was lowered or switched off at night.

Utilising light sensors mounted at various locations around the Mall, the new lighting strategy incorporates a smart lighting system which balances the public, shop-front and natural lighting to ensure the correct lux levels are maintained and the area is continually compliant with lighting standards. The down-lights automatically switch on when the ambient lighting falls below the statutory requirements and are each capable of turning on and off independently, reducing overall energy consumption.

The light fittings were custom-designed for this project and the design documentation was prepared by Haron Robson, with the luminaires manufactured by 3S Lighting to precise specifications. Equipped with Traxon RGB LED strips and an 150W Osram metal halide downlight, and controlled via a single DMX controller running specialist Lighting Application Suite software, a testing phase was imperative to ensure the correct lux levels, measure light spill and guarantee all the effects were achievable using this very unique luminaire.

Installation and detailed programming & commissioning followed, before the final unveiling earlier this month.

The catenary lighting is the final phase of the multi-million dollar make-over project for Pitt Street Mall. Lord Mayor Clover Moore said during the lights-on ceremony “The new lights, which are energy-efficient and complement the colourful shopfronts along the mall, are the perfect addition to this world-class retail experience.”

To celebrate the festive season, the lights were launched with three Christmas-themed programmed patterns, which will be displayed each night throughout December.

Glen Haron, our very proud MD, sends congratulations to the City of Sydney and Tony Caro Architecture on this "great civic project". 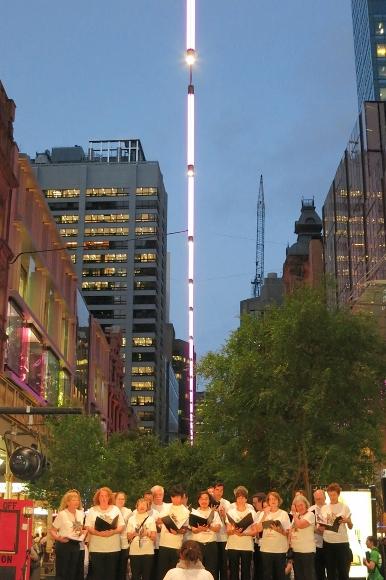 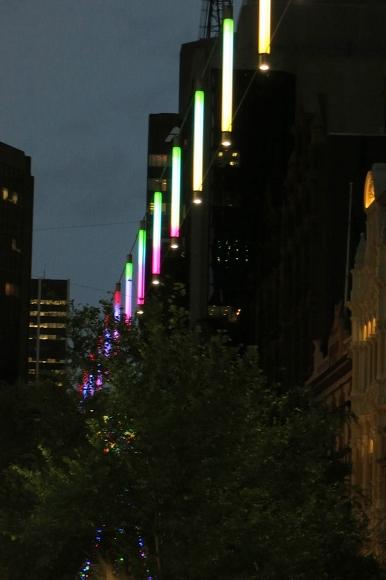 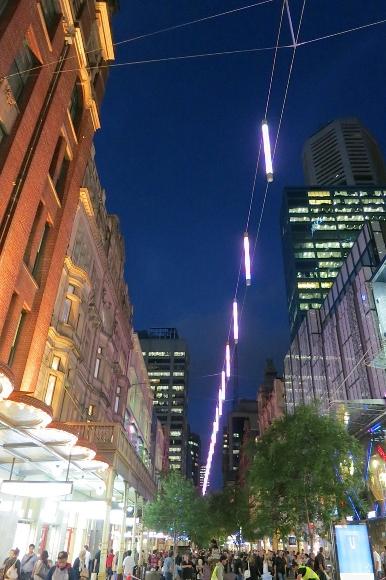 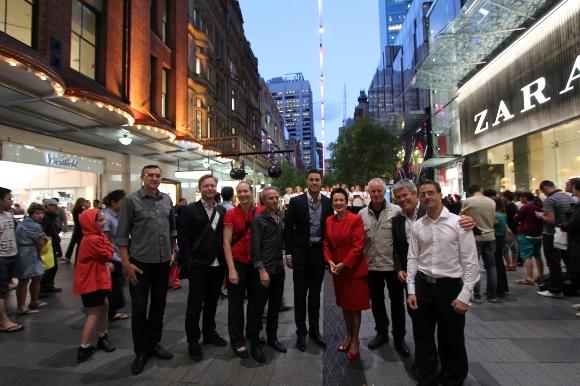